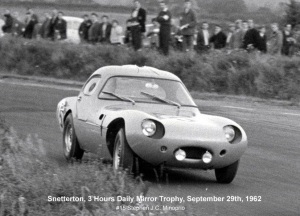 The registration number was also used as a fake road registration on the second Marcos Fastback, while racing abroad.

This car has led a very international life. It was purchased by Andy Sewart, a US army officer, while being stationed in the UK. Although he was able to take the car with him when he had to move to Germany, he decided to sell the car when he moved back to the US. It was sold to Japan. Andy however always regretting selling his beloved Gullwing and after many months of searching he found it with its then owner and was able to acquire the car for a a second time. He had it shipped to the United States and embarked on quite an extensive rebuild, enjoying once more a couple of historic races.

Pretty soon after the rebuild was finished, another house move meant he had to let it go again and he sold it to Sweden. It is one of only a handfull of race ready Gullwings. 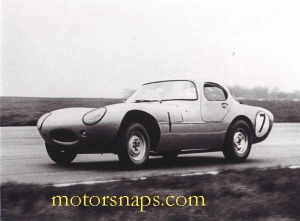 Below (left) as campaigned by Andy Sewart in Germany before it was sold to Japan, and (right) after its rebuild in the US when Andy had re-acquired the car from Japan.

And after its return to Europe, being occasionally campaigned in Sweden